It’s so hard to write about oneself but this is long time coming. Ever since I was young I owned some type of camera, several family members also had cameras, we had a lot in the house, but i wasn’t allowed to touch most of them. Back then, for me, it was an Instamatic. I might add, no one in the house ever became a professional photographer though. A couple of my sibs were pretty good but mostly for personal use. My mother still took me to a professional every couple of years. You see, my mother wanted pictures but she couldn’t take a picture without cutting off someone’s head or feet, so dad wouldn’t let her use the camera anymore lol.Some people just aren’t cut out for certain things in life, I guess.

Back in 1982 I was heading out to the Bahamas and, of course, wanted to take some pictures, I had no clue when I would head back that way and wanted proof I was there. My sister handed me her Nikon, manual SLR camera and showed me how to bring the meter to 0, nothing else.

So, off I go, thrilled to have a nice camera in my hands for my trip. I shot several rolls and had them developed upon returning. OMG, they were horrible images. Bright skies and dark faces. Even as a beginner I knew they were terrible. So there I sat, staring at that little black box and wondered what made it tick. How does one get a decent image out of it. Better yet, how to get a spectacular image out of it.

I needed to know everything, not just lighting and good composition, I wanted to know what happened when I pushed that shutter button, what was going on with all that noise inside, the clicks, the clacks, everything. I set out to learn by reading books and practicing, oh so much practicing, rolls and rolls of practicing. Over and over shooting the same thing and comparing images. I shot slide film for about 10 years because what you shoot is what you get. Unlike film, which has about a 3 stop leeway on either end. You had no clue if you nailed a shot or not from your print.

A couple of years later I started working in a camera store which had the best 1 hour lab in the area, mostly working in the lab and running one of those big machines. I loved the darkroom and this was another extension. Photography was growing for me. The worst part of working in this lab, but interesting none the less, was quality controlling the police crime scene images. Even autopsies, I have seen things I never need to see again.

Several years down the line i became very ill and had to hang up my camera for awhile, other than an occasional shoot. My health started to improve little by little over the years and I picked up the camera once again, quite surprised I didn’t forget a thing. I practiced so much over those previous years, how could I forget??? I sure needed to brush up though.

I was probably one of the last to buy into digital and although I do love it, I still miss film and the darkroom but I have put that behind me and grasped Photoshop like it was my first born child. Photoshop is my darkroom now and I love every minute of it. And the learning never stops, I still learn something new every day in this field.

Many say photography is their passion, for me, it’s a must have, I can’t live without it, it’s not possible. No matter what happens, I will always pick up my camera again, over and over, until the day I die. I plan on taking my equipment with me 😉

I not only do people portraits, 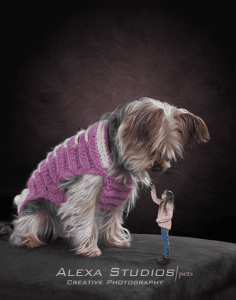 but I love working with animals. Animals can bring out such joy and excitement, not to mention, they have fantasies they want to live out too. Visit us on our pet site.

I get excited when I hear from a client, that means I will have my camera in my hands, and you have my guarantee your session, from start to finish. will always be handled with joy, happiness and professionalism.

You probably did not need to know all of that, but the more you know, the more comfortable you will feel, knowing you are in the hands of a professional who cares.

Welcome to my world, won’t you come on in!

Turn down the lights